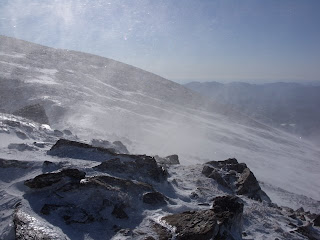 Centennial Cone is a JeffCo park that I like riding quite a bit and hiking to it's namesake summit has been on my list for a while now. Yesterday the weather was not all that nice so I decided that a lower peak would be a worthy objective. I packed my poles, some snacks and tea and headed out. 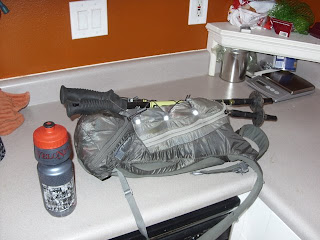 This was my first ride with flat pedals in a while as I didn't feel like hauling 2 pairs of shoes. It as strange but worked fine. At least I was able to hold off the Garmin Chipotle boys to the first summit on Golden Gate Canyon road. They were the only other non car people I saw the entire trip, must have been the fog and the rain? 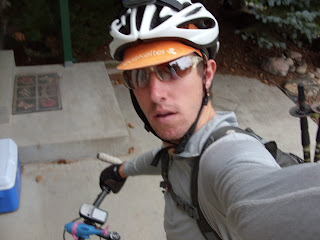 25 miles of riding from my house up to over 8k feet I arrived at the park to this. The Cone wasn't even visible! Nevertheless I knew where it was located so I locked up my bike and headed off on foot stuffing my face with salted almonds on the way. 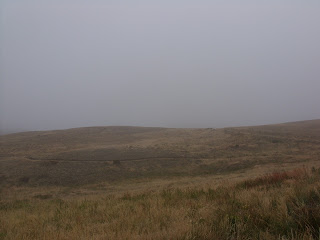 As I hiked, the clouds broke up a bit and my objective's lower slopes at least came into view. 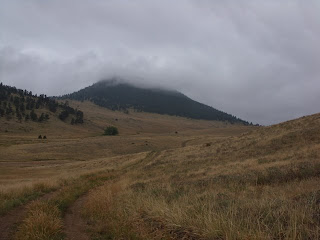 I wanted to traverse the peak and also hike up pt.7850 within the park so I hiked around to the north side past the private property before I headed up. 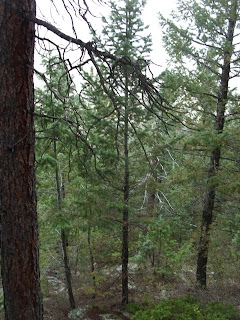 There isn't really a trail but there are numerous game trails to help with the bushwhacking. Getting around snags and deadfall just required a circuitous route. Mostly I just stuck near the rocky areas and trudged on straight up the 1000 vertical feet or so from the main trail. 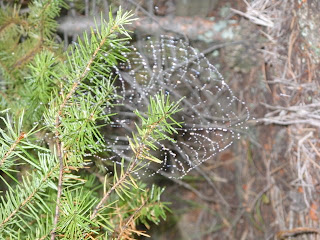 Eventually I came to this which happens to be where the summit lies. You might be able to find a walk up route but I just made a couple easy class 3 moves and went right over the rock. 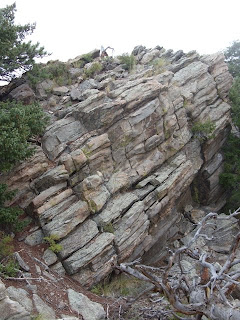 There are actually 3 markers up here but this is the summit (8679 feet) and register. It's fun finding a register with years and years of people's names as opposed to the 14ers where there are like 2 weeks worth. Hiking remote and just not so well known peaks is a good time. Needless to say, I didn't see anyone else on my way up or down or on the way back to my bike. 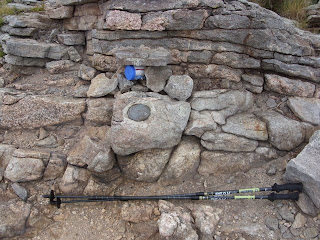 There were a lot of ladybugs chilling in the rocks though. Dozens came out when I disturbed the summit register! 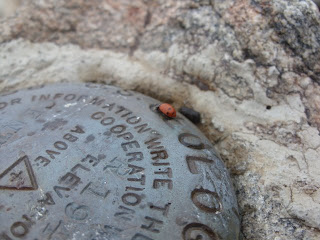 Funny the only part of the day I wore my rain jacket was sitting on the summit. Generally it was just misting all day, never really raining drops except then. Wool baselayer and a windshirt was fine on top, the new Patagucci Traverse pants (review coming a little later...) on bottom. I had some tea and chilled out eating lunch. The views came in and out as the clouds willed. 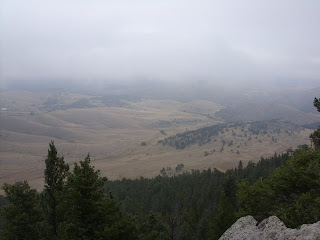 Eventually all the food was gone so I decided I better get on with the rest of the day's plans. I began hiking off the opposite end of the Cone and made a bunch more class 3 moves down the rocks. 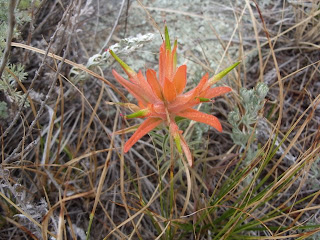 Lots of cool scrambling and even low 5th class climbing around but I mostly just headed down, tossing my trekking poles ahead of me when I needed my hands. 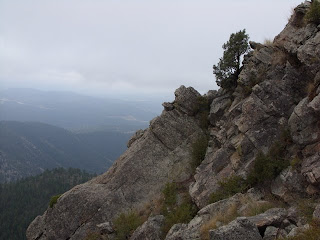 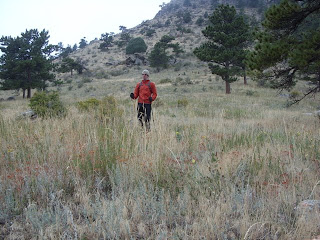 The flowers were hanging on but their time is coming sadly. They did brighten up the dreary weather. 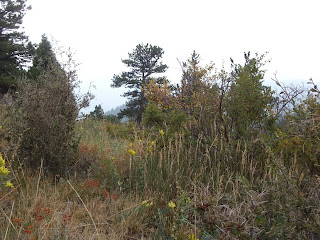 Lots of these little yellow ones. 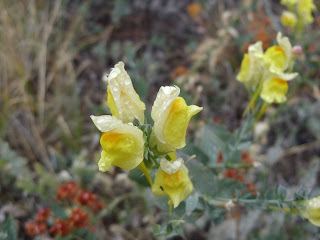 The park is open for hunting during a small part of the year and there was random scattered evidence of humans around but thankfully very little trash. Anything I found I took out with me. 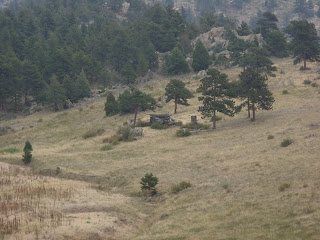 Away from the Cone itself I stayed high on the contours and scrambled up the rocks for fun and on the lookout for anything else interesting. I did find evidence of black bears but nothing that indicated they'd been there recently. Very little berries around the park at this point. 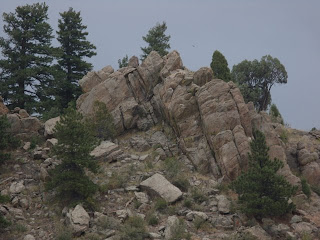 My final objective, pt. 7850, lay a couple drainages away. 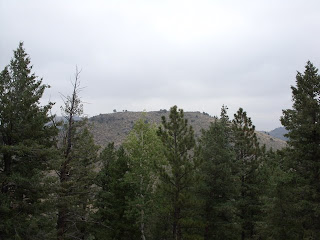 Down to Elk Creek which was running, small but steady, I then began the ascent of it's slopes, dodging cacti all the way up. 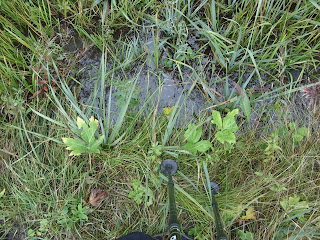 Bye bye Cone in the distance. 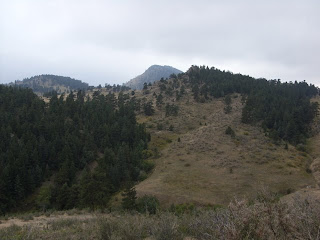 My only evidence of possible cats. This is high up on the ridge where people rarely go I'm sure. 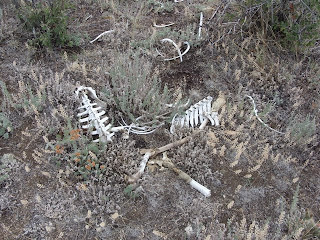 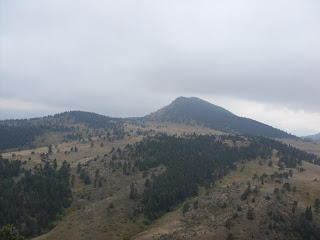 I traversed the ridge and found the high point on some rocks in the middle. 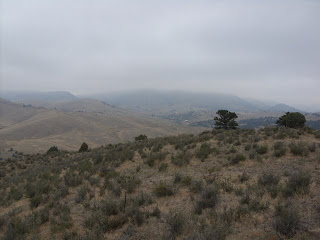 From there I followed more game trails down to the Evening Sun trail. One more climb back to the parking lot and I found my bike. Hopped on, downed my reserve Clif Shot and pedaled the 25 miles back home. 6500 feet and 58 miles human powered is pretty good for a rainy day I guess. 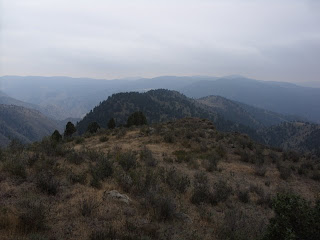 While everyone else enjoyed a spectacular Vapor Trail 125 this past weekend, my body apparently had other ideas. The rollout was very relaxed, the first climb was great as I kept those who I wanted to watch in my sights and followed my nutrition strategy to a T.

Then we started going downhill on the Colorado Trail and my eyelids started going downhill towards my cheeks. The sleep monster was out in full force and no amount of food, heat, cold, caffeine or physical abuse could keep him away for the next 2+ hours. After nearly eating dirt a handful of times and bashing my legs on numerous rocks I made my way to aid #1. There I sat down, tried to nap and when that was futile, I threw in the towel. Frankly just getting through the race had no appeal to me even though I knew I could do it. I might as well come back another day and enjoy the course in the daylight if I couldn't stay awake anyway.

Some exceptionally nice aid station volunteers chatted with me while we cheered on the rest of the racers coming through and then drove me back to the Element. Marni shared her sleeping bag with me and we crashed out fitfully until morning. Bumming around Salida was a good time and the mountain summits all around were begging my visit. We hung out with Jeny and Dave and company and cheered on my awesome fellow racers and finishers before heading home.

I really don't know why I couldn't stay awake but it was definitely pissing me off. I certainly was well rested and even got a nap in the car on the way down unlike the KTR. I think in many ways I've just had a long (and wonderful) season of bike riding and it's time for a little break. So I've got nothing bike related on the calendar until TU and even that doesn't have to involve no sleep. In the meantime I think I need to go relax in the mountains, climb some rocks and ride when I feel like it. And yea dad, maybe I should get a job?
Blathered by Chris at 3:24 PM 3 comments:

First up GO GEOFF! He's killing it right now. Wow! I'm sending you all my good vibes buddy, you're rocking it. Follow along here.

Second up, Marni and I are about to head out for the Vapor Trail. Between the CTR and the VT, it's been pretty nice not driving for dozens of hours to get to races. Chilling at home and sleeping in is quite a relaxing lead up to a race. I'm pumped for tonight's 10pm start.
Blathered by Chris at 12:19 PM No comments: 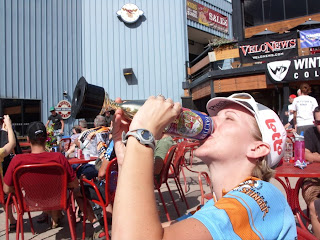 First off I have to say how proud I am of my wife. This past weekend we were in Winter Park racing the classic, King of the Rockies. It was her last XC MTB race of the season, which despite early fears, was quite successful with her upgrade to battle the Sport women. Knowing her form was great and her series place locked up, I told her to go for the win from the gun. Sure enough she jumped out hard ahead of the girl who beat her last week and held her off for 26 miles to take the W! Not only that but she dropped 15 minutes off her time from last year despite racing the long course which is at least 10 minutes slower. What I wouldn't give for a 25+ minute improvement in a year at an XC race! I'm really proud of her win, her overall improvement and also her 2nd place for the series. Looks like she earned herself an upgrade to Expert for 2009 :)

My KotR went well, finishing 5th and posting my best ever time for the course by 5+ minutes. I got left for dead on the 3.5 miles road start (again) but at least the 34x18 worked better and I was less than a minute down onto the climb. Note to self, 2:1 gearing would be fine next year. Once we hit the climb, Matt Hayes and I rode strong through most of our starting field even with their "headstart". He dropped me on the downhill but I kept him in sight through most of the rest of the course. That makes me happy because Matt is a strong SSer and a regular atop the podium in the SS class. The final climb up Lower Cherokee popped me a bit and I limped into the finish. Still I'm really happy with how I raced and XC pace was feeling much better than last week on the mountain circuit.

I should have found a way to race one more Winter Park XC race this season as 4 races instead of 5 (in a best of 5 scoring) left me in 6th for the series (two 3rd places, two 5th places). With one more even half assed race I would have taken 2nd place easily for the Expert 25-29 men. I guess that's not too bad for not taking XC seriously and racing rigid SS but I was a little bummed when I realized it. I'm still really hopeful I can win an Expert race on the single before I move up to Pro and proceed to get my ass handed to me every race for the rest of my life. I'd be lying if I said that isn't a goal for next season.

This weekend is the Vapor Trail 125 and I'm looking forward to it quite a bit. It's another race like the Kokopelli Trail that I'm still a bit shocked that I get to do. When Leadville handed me my ass in 2005, Scott and I marveled at Dave Weins taking 12+ hours to do the VT. That kind of effort was almost unfathomable. Yet tomorrow I'm headed to Salida to hang out with tons of great friends and have an overnight ride though beautiful country. Things like that sure make me realize how my life has changed in the past three years and I'm really greatful for that.

Fall itself really feels close now. Marni declared it here but I'm not ready to give up on indian summer just yet. There is still time to eek out a few more rides and adventures before the snow flies for good. T-minus 35 hours to the VT start!
Blathered by Chris at 9:56 AM 4 comments: