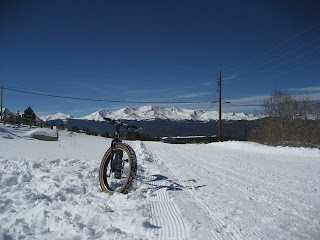 The last month has been strange. Since finishing the Tour Divide it's been a mix of extreme sloth, occasional unstructured exercise and long jaunts in the mountains. Plenty of time to think, too much time to eat. I'm beginning to itch for some structured training again. Rolling out with the Colorado Trail racers yesterday morning probably pushed me over the edge.

Today I registered for the 2010 Arrowhead 135, a large part due to the influence of my "friends"... ahem Jill, Doug, DaveB, Eric, Pete, Jeff, JayP and T-race. Of course I'd by lying if Mike's beautiful 2009 race report hasn't also been an influence. I've wanted to race in the snow for a few years and the awesome Leadville winter series has kept me in check. However the passion has only grown despite my focus and funds being allocated elsewhere. Winter is one of the most beautiful seasons and I really do enjoy it's harshness. I decided this was finally the year to get serious. Last week I sold my too small 18" Pugs and there is a new 20" Pugsley on the way. While I would love a Fatback, it's just not financially in the cards. Luckily the new grey Pugs is quite attractive, much better than purple. I don't have the money for a wheelset yet but I do have a brand new 20" Surly Karate Monkey frameset in red that's for sale if anyone out there is interested? Luckily or unluckily, depending on your viewpoint, I'll also have some actual earned income coming in the somewhat near future.

So now I'm committed to at least racing the Arrowhead. I'm a little nervous and a lot excited. There are critical things to figure out, number one being my footwear situation. But nothing forces creativity like necessity and I think I'm up for the challenge. Is it too early in August to say...let it snow?
Blathered by Chris at 4:42 PM 15 comments:

Marni has much better words for our Longs Peak trip than I do so I'll just share a few photos. Can't think of a much better way to spend the day though, just awesome.

Dawn just below the Boulderfield 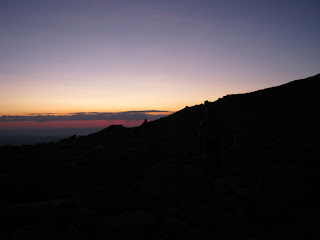 Coiling the rope at the top of the technical section, I really like this picture. 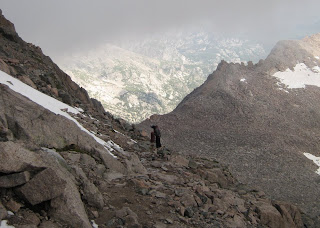 Summit together. Our 20th joint 14er, only our third without Turbo. 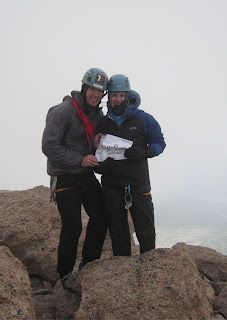 Admiring the view of the cirque below. The Diamond, Mt.Meeker, Chasm Lake, Mt.Lady Washington. Everything the opposition direction was one giant cloud. 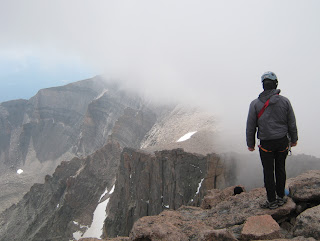 One of my all time favorite Marni self portraits. I believe this is while waiting at a belay station while I tried not to fall off icy 5.4 in Exums somewhere above. Background is a cloud. 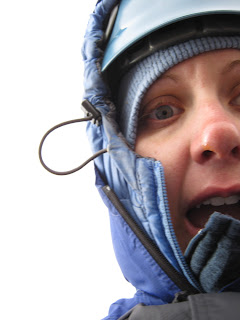 More to come and I sure am glad to be so lucky.
Blathered by Chris at 2:48 PM No comments: