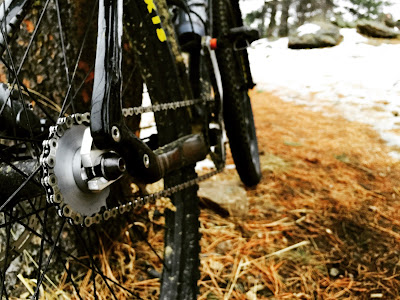 I get asked directly or indirectly all the time, "why singlespeed?" Why give up modern gearing when it's so good, so wide ranging, so fast? Hell if you stick with XT level components it's not even that expensive, though XTR and XX1 are as pricey as ever.

It's a valid question in this age of Di2 capable, 10-, 11-, and 12-speed mountain bikes. I'll attempt to put some words to the issue here though they represent my feelings alone. I don't promise your satisfaction in my answers or reasoning.

For me singlespeed all started as I got sick of breaking Trek Fuel frames and maintaining rear derailleur cables in the dusty Front Range of Colorado. I got a Redline Monocog for Christmas from my wife one year long ago and quickly grew to love it's simplicity. There was nothing to adjust and minimal maintenance besides the occasional tightening of the chain and some lube. I just got to hop on and ride. When I moved to Boulder from the flatland triathlon scene of St. Louis, MO I tried to keep the climbing at bay. I stayed to the east, getting promptly thrashed by the hills anytime I ventured west. But something unexpected happened when I started riding that heavy 26" Monocog. I got faster. I became a better climber. The better I climbed, the more I began to love mountain biking. I ventured into longer rides in more difficult terrain. Probably a year later I ditched my front suspension for a rigid fork and haven't looked back since. To be frank, the lack of front suspension is a far bigger detriment to my speed on the local XC and Endurance scene then the lack of gears ever has been.

So what logical reason is there for riding and racing a singlespeed, especially down the 2700 mile Tour Divide? Well there are a few. First it's lighter by a couple pounds. My rig was one of the lightest out there despite me carrying more weight in gear than I did on my 2009 run. Second it's weather resistant. In 2009 the weather was pretty horrendous by comparison to 2016 and the mud was out of control. The singlespeed trucks right on through most of the time without any major issue. A straight chainline and some steel drivetrain components stand up to conditions that put a pretty serious hurt on geared bikes. My drivetrain this year went from Banff to Mexico without needing anything but a few shots with a hose and chain lube. Too bad I can't say the same about PF92 bottom bracket bearings. Third a singlespeed is cheap. I'm not sponsored in any serious way and pay for the vast majority of my gear and parts. Cheap drivetrain components are nice when you put serious miles on your gear training and racing. Most of my steel cogs are a decade old, the chainrings last thousands of miles, and chains are replaced for $30 or less.

People's biggest misconception (I think) is that a singlespeed is just so much slower than a geared bike in the vast majority of terrain. With proper training I'm not sure that's actually true and looking at Strava segments of quite a few pieces of the Divide seems to at least support my theory. I turned in the 3rd fastest all time segment (that's uploaded to Strava...) for the final 105 miles of Tour Divide in terrain that should punish a spun out single speeder pretty severely. While most geared riders train to optimize power in a preferred cadence range and then gear their bikes to keep themselves there, I chose a gear and trained my body to produce power over a wider range of cadences. I can make reasonable power for long time periods from 25 rpms all the way up to 110 rpms. Would I be faster I could stay at 85 rpms all the time? Maybe but I'm not totally convinced of that. My Tour Divide moving average speed was 11 mph, not a whole lot different than Mike Hall's. He still kicked my butt but probably not because I was on a singlespeed.

At the end of the day though, none of these what-ifs, how-comes, or whys even matter.

I just flat out love riding my singlespeed. It excites me. I'm passionate about it. Every time I throw my leg over my singlespeed and mash down on the pedals, the direct drivetrain connection feels so good.

Long ago I gave up any hope of being a "professional" athlete. Giving up that fantasy gave me the freedom to do what I want, ride what I want, and race what I want. (Again) this year singlespeeders in the Tour Divide have shown that they're more than capable of being competitive, no matter what the conventional wisdom might say. And with that maybe the why doesn't matter. Or maybe those who ride one gear are just so passionate about riding their chosen bike that it overcomes any obstacles the single gear brings. Either way I'm not likely to give up my singlespeed any time soon.

Good read and all very valid points. (I favor the 1x1 also, so my opinion may be biased)

Yes, very valid points! I'm 55 and been riding single speed for around 10 years. There are days that i want gears and full suspension, but do I really need them..., I'm not convinced

I totally share your viewpoints! Just out of curiosity, what ratio were you running for their Tour Divide?

I totally share your viewpoints! Just out of curiosity, what ratio were you running for their Tour Divide?

Thanks for posting this about SS riding. I think you did a good job expressing your thoughts on single speeds!
Congrats on your major accomplishment! So happy for you and think about your dedication and determination a lot! You are true SS BA!!

I've been riding since 1993 and have had a little bit of everything, I picked up a Crave SL two weeks ago and haven't had this much fun riding since I first started. It's like rediscovering mountain biking all over again. The rigid carbon fork is actually pretty sweet and so far I am not missing suspension or multiple gears.

As a SS riding father of a 2yr & 5yr old I am very impressed by your dedication to find the time & spousal support to train for such an event. Congrats on your record. Can I, please follow you on Strava (Scott McGrath, Edmonton) as motivation to squeeze more out of my days?

Congrats on a great ride Chris. I was stoked to see you pull off a result which a lot of planning and hard work had gone towards!!

Great writing Chris and I agree with almost everything you have written. I plan to go back to singlespeeding very soon. I haven't ridden singlespeed much after completing an off road century in 9 hours back in 2012 and succumbing to hamstring tendonitis a few months later. I have ridden gears since then and feel like I am ready to go back to SS. Thanks for your great article that is inspiring me to pick it up again.

Thanks for the outlook. I'm a gear shiftier now and single speed has my interest, but I'm just not ready for it. Congrats on a great tour!

Hi Chris, I ride a single speed, but I'm using a belt drive. Did you carry any chain links or chain repair of any kind when you did the Tour Divide? I switched to a belt drive and carry a spare belt in case of the belt breaking, but in deep mud, the belt drive does get messed up (I am sure a chain would too). I'd like to go back to a chain to compare the two, but just wonder how you would deal with a chain break in the middle of no where. A simple break you could just use a master link, but a break that wrecked a few links....?

Congratulations on your amazing ride and your amazing time! I too love the simplicity of a single speed, but still need some thought and practice to feel comfortable heading out for a multi-day ride and feeling prepared....

The silence & simplicity of a SS is truly beautiful.