Aaron was on call but we still wanted to get in a big day outside. Luckily the Flatirons get great cell reception and we spent almost 9 hours blasting up and down some big formations. We clicked off the most popular route (direct east face on the first flatiron) by 8:30am while the Boulder Boulder was getting going and spent much of the rest of the day dodging the crowds on less traveled routes (2 more on the first, 1 on the second and 1 on the Spy linking into the first). We simulclimbed every route, often linking 1200 or 1400 foot faces in just a couple of pitches.

Aaron somewhere up there at the end of the skinny rope. 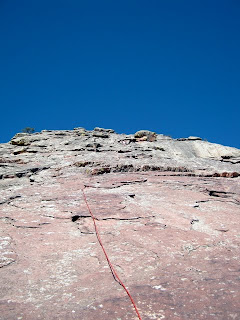 Cool parasailer flew right by the face on our first trip up. Close enough that we exchanged hellos! 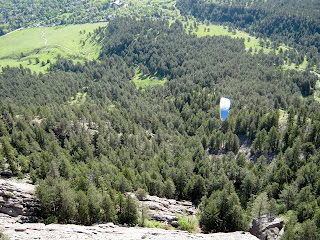 Following Aaron up the cool fin feature known as the Spy before linking into the North Arete on the First Flatiron. 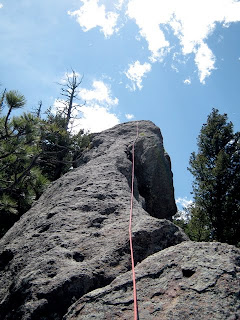 Lots of pretty lichen and plenty of flakey stuff once you get off the Flatirons trade routes. 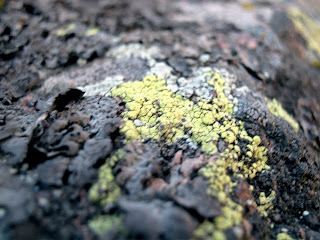 5600 feet of climbing according to Aaron's Suunto, not a bad day. Hopefully we can translate this practice and speed to some rock routes in the Park soon. The Petit is calling my name.
Blathered by Chris at 8:34 AM 1 comment: