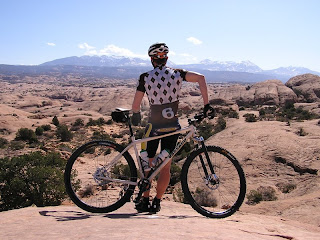 More when I return from the desert but it's been sweet...
Blathered by Chris at 6:40 PM 2 comments: 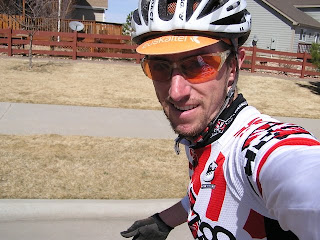 Another beautiful week here in Denver. Man winter has been mild this year, I'm actually hoping we get a spring blizzard because we *need* the moisture. But since I can't change the weather, I might as well take advantage. Riding in shorts and a jersey most of the days is sweet. And yesterday I went hiking and rock climbing up on Lumpy Ridge above Estes park. I climbed a bunch of pitches on The Pear and had an all around awesome day. You really can't beat climbing at 9k+ feet in the sun in the winter.

Today I'm headed off to the JeffCo trails for some more MTB and hike-a-bike practice and on Saturday Marni and I leave for Moab for the week. Awesome!
Blathered by Chris at 8:42 AM 2 comments: 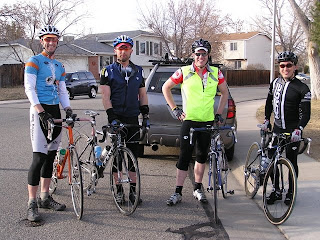 After a tough week, nothing beats a weekend blitz to salvage the mind. Friday I was able to sneak a ride in between study sessions. Saturday I took my test and feel pretty good about it. One month of waiting and I'll find out how I did. After my test I ran a few quick errands (post office, got to make that money) and then Marni and I took Turbo to the dog park for a long walk. He was extremely happy and we took him by DQ on the way home and got some ice cream too. Marni was off with the girls that evening and I was eager to test out the newly tubeless tires so we went out separate ways. I stayed out pretty late, enjoying all manner of dirt, road and bike path options with a quick stop for dinner in Boulder at the Qdoba. Refueled I rode a bit more, taking the long way home and enjoying a nice night and what felt like the stars all to myself. The new EOS II worked really well (thanks Betsy!) and I never even dug the "big lights" out of my pocket. Marni and I arrived home about the same time and lucky for me she brought me dinner from Pasta Jay's. I chowed down and went to bed, another ride planned for the AM.

Sunday brought nice weather, more sun and a group of four for a bit of road bike time. Brett, Jeremy, Erik and I, the core of the century crew, headed South for another awesome 100 mile day. I doubt any of them figured they'd be riding at least a century a month in 2009 but so far we're 3 for 3 and don't see any reason to slow down now. Pizza, cookies and beer awaited our arrival back at home, finally with plenty of daylight to spare. While we were gone, Marni retraced some of my steps from Saturday night. Isn't that a pretty picture? :D 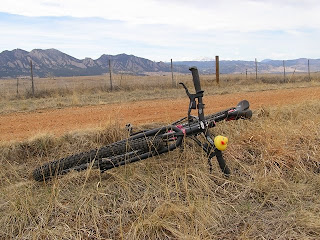 This morning I took Turbo for a walk, getting a slow start to the day with a lot of workout hours in my legs. One of the best things about this extended time off I've been having is getting to really appreciate life and slow down a bit. It's all too easy to rush from one thing to the next, squeeze a huge weekend in between weeks of work, be unhappy with where you are and think only of where you want to be. We all strive for perfection but thinking only of what is better leads generally to unhappiness. But with a little time for reflection it's easy to see, this is good. Here and now. This is where I want to be.
Blathered by Chris at 10:11 AM 1 comment: 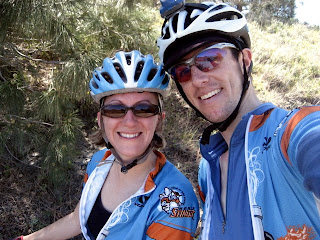 While this week has been less than ideal, the next two look off the charts awesome! The weather for next week is shaping up nicely for lots of MTB time including some good hike-a-bike practice for the AZT. The following week I'll be stealing my bride off to the desert and we'll be spending spring break together in Moab. Our spring break last year was unbelievably fun and while we're not road tripping quite as far this year, we are going to spend a week away from home and get some awesome riding, hiking, climbing and relaxing in.

Anyone who wants to join us for Moab activities is welcome. I'll be sneaking in at least one trip on White Rim as well. First on the new bike, should be fun!
Blathered by Chris at 9:13 AM 4 comments: 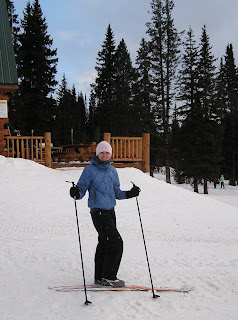 This past weekend was a lot of fun, just not quite how I had hoped it would go. Since then it's been generally worse with me fighting off the plague. Friday I watched little Zuri in the AM and went to climb in Eldo with ChrisG (Green Spur, sweet!). My cough was getting worse Friday night and by Saturday I could no longer ignore it. All manor of symptom supressors were experimented with, none exceptionally useful but perhaps the Nyquil that let me sleep. Still I had a great "meetaversary" weekend planned with Marni and I wasn't going to bail. I scratched the time trial from Saturday morning and ended up resting as much as possible Saturday. We drove up to Leadville early due to the time change and early AM start on Sunday and stayed at a kick ass place thanks to Chris and Kathy of Cycles of Life and Proving Grounds fame. 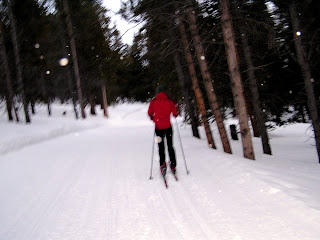 Saturday night Marni and I hit up the Tennessee Pass Cookhouse which was awesome. We lucked out and got bumped to a Saturday reservation which worked out really well. Cannon got us setup with gear and sent Marni and I out on XC skis for the first time. It was beautiful out there and even for total noob XC skiers we made our way up the hill and to the yurt for dinner without any major problems although I'm not sure we were fast than walking. 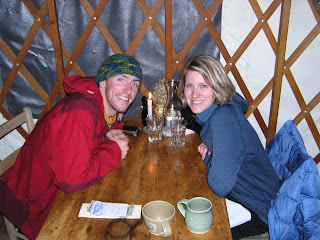 Dinner itself ruled. I had the Elk and it was fab. I really enjoy dinners where you don't pick your items as you get to try a lot of new things that way and the chef didn't disappoint. Scallops, elk, potatoes, green beans (gasp mom!) , a wild mixed fruit pie, great salad, man I was stuffed. Hopefully I didn't annoy the rest of the small yurt with my coughing. Some hot tea at least helped supress it a little bit. After dinner we skied back to the car by headlamp and that was great. Definitely faster than walking :) 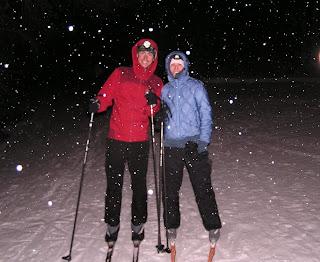 Sunday morning I woke up feeling pretty terrible but I was willing to give the race a shot since I was already there. We snagged a pancake breakfast, got registered and generally enjoyed a really nice early and crisp morning in leadville. I made a halfhearted warm up, finally relinquished my puffy and it was time to race. Luckily the lead pack didn't charge out of the gate too bad but Shawn eventually took the lead and set the pace. I snuck on his wheel for a while and tried to get my motor going. Unfortunately the legs just weren't there and my cough was terrible so I eventually said goodbye to Doug who was riding near me and called it quits. The course was awesome though so I at least soft pedalled the rest of the way around to enjoy it. I really do like riding in the snow a lot, perhaps next year I will prep my snow bike properly and see what can be arranged to go to Alaska. Near the end of the race I even stopped to write Marni a "C heart M" note in the snow but she missed it. Bummer!

After everyone came in we checked out the Ski Joring (skiers being pulled by horses over a jump and slalom course) which was really fun to watch, esp with a couple crazies crashing right in front of us. Eventually Marni drove us home and to bed I went. Generally I stayed there until yesterday when I at least was able to venture out to run a few errands without feeling like death. Today I'm a lot better and got a good little road ride in without any crazy coughing or wheezing in my lungs so tomorrow I'll see how my body likes a couple hours of effort.

Saturday is my Praxis test. I've got 2 more "practice" tests to work though but I'm passing the CO state standard and maybe the "excellence" level as well. The questions are generally easy but once and a while I get a stumper requiring some random fact from long ago that I don't remember. Luckily my math basics are really strong and I'm looking forward to getting it done and finalizing my requirements to teach next year.

This week has definitely not gone as planned but I've got to be healthy and I've got to finish my test well so I'll deal. Luckily daylight savings is here and the next couple weeks should be some real nice training on the MTB to get ready for Arizona. Spring break in Moab with Marni isn't too shabby either so I'm looking forward to it!
Blathered by Chris at 6:57 PM 3 comments:

My last training block was good, the final week very good. And as such I am now sitting on my butt resting this week. The only problem is it's 70 degrees in Denver and sunny, warm temperatures are not conducive to staying indoors recovering. The last 3 days I've been resting (ha!) by going climbing and riding to the rock. I've got plans to go tomorrow afternoon too so today I must sit and lie down and rest aside from a short spin. At least I'm catching up on all my other chores this week like keeping the E in tip top shape, cleaning the house and studying for my test in a week and a half.

On the plus side I felt very confident leading 5.7 trad yesterday, gradually working my way up the Boulder classics...
Blathered by Chris at 12:01 PM 1 comment: