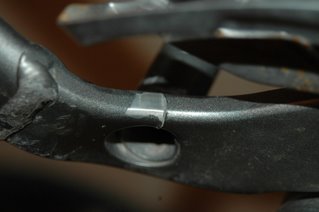 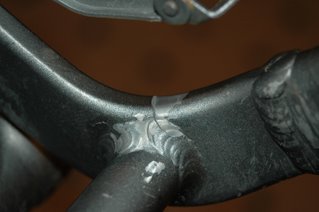 The Fuel has had a hard life of being ridden a lot and not being a garage ornament like so many mountain bikes. I bought it shiney and new last year and despite a bunch of new goodies, I guess it wasn't enough. I broke the swingarm sometime recently, perhaps at Moab. Sigh...I'll take it to a Trek dealer tomorrow and hopefully get it warrentied.

Scott and I found the crack while we were tearing apart the Fuels tonight from the destruction of Moab. Lots of sand and water in every crevice. We tore both of them down to bare frames and now it's time for the offseason rebuild with new parts and fresh grease. Toasted about 4 sets of brake pads, 1 rotor, 1 headset, 2 chains, wheel bearings, a swingarm and who knows what else. We'll see what else I find as I begin to put them back together. It was still a pretty fun night! 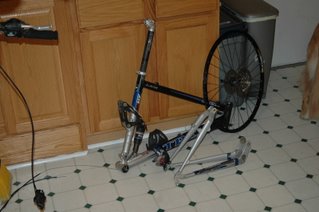 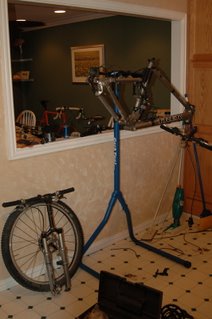 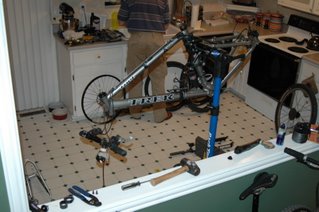 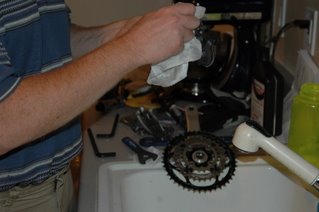 While the Fuel is being repaired I'll be back on the good old singlespeed and Scott will be on his 1x8. I put the 18 tooth cog back on to revisit the 2:1 ratio for better training. By removing an extra unneeded spacer I fixed the problem of the lockring rubbing on the tugnutt. I also repaired the sidewall in the racing ralph I sliced in July at the E12 and mounted both wheels up DIY tubeless. I rode it to work today and it felt great. Just a couple weeks more of rest and recovery and I'll be back to training. I can't wait! 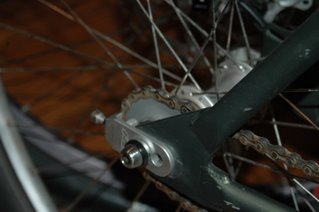 Poor Fuel :( What a sad story... I guess that's what happens when you ride it ALL THE TIME :)

My wife would kill me if I turned the kitchen into a bike shop :D

Fuel swingarms should be considered expendable parts if the bike is used more than a season. That particular break should be warrantied cause it doesn't look like it's the result of a crash impact.

I've broken many swingarms...but it's the carbon chainstay that goes in my case.

We aren't big fans of our kitchen and are hoping that there is an irreparable spill or damage from bike parts or greece so we have a good excuse to redo it :)

Broken swingarms and chainstays was the #1 reason I blew my wad on a Ti frame. Of course, now I'll never afford a Pugsley.

And speaking of remodeling the kitchen, reminds me of a joke I got in my email the other day. Pasting...

After an hour, the following conversation took place:

"You have no idea what I had to do to be able to come out riding this weekend. I had to promise my wife that I will paint every room in the house next weekend."

"That's nothing, I had to promise my wife that I will build her a new deck for the pool."

"Man, you both have it easy! I had to promise my wife that I will remodel the kitchen for her."

They continue to ride when they realized that the fourth guy has not said a word. So they asked him.

"You haven't said anything about what you had to do to be able to come riding this weekend. What's the deal?"

"I just set my alarm for 5:30 am. When it went off, I shut off the alarm, gave the wife a nudge and said, "Bike riding or Sex" and she said,